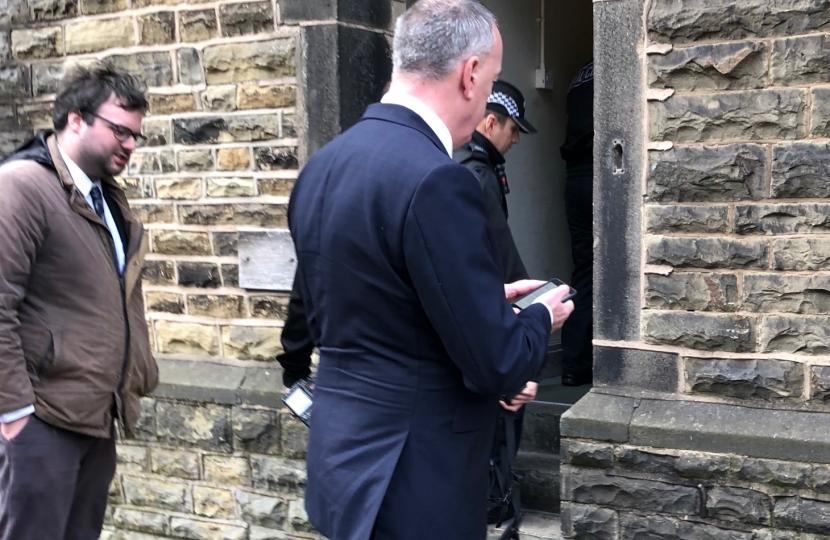 Clitheroe Conservatives have again called on the Labour  Police and Crime Commissioner to take measures to improve the quality of policing in the Ribble Valley, stop retreating from rural policing and give to the small towns like Clitheroe an equal and appropriate share of the police budget.

Ken Hind former member of the PCC Police panel and former RVBC Council Leader  commented,'' The members of the Police  Panel have argued for more equal distribution of police resources in Lancashire for some time. It is staggering that in the centre of Clitheroe over the weekend the alarm at the Council building goes off and no police offices are near enough to deal with it . Burglars had  free reign to break in through the emergency exits , smash open the cases containing valuable municipal  chains and make off with them without council security or the police being in a position to do anything about it. Presumably by now they have been melted down and lost to the Borough’s heritage for ever.

''It is not acceptable for the police station in Clitheroe 200 yards from the council chamber,  to be a darkened deserted  silent building at night,  closed to the public permanently during the day, and for  police officers to attend emergency call outs in the Valley from Colne and Blackburn. By the time officers arrive burglars like these are over the horizon and gone. Surely the town centre CCTV paid for not by the Crime Commissioner but by Ribble Valley Borough Council tax payers will provide some clue along with the roadside APR cameras of the identity of the offenders - sadly the horse has already bolted from the stable.

''We understand the Chief Constable  attended the Council Offices  after the break on Monday,  for a meeting scheduled months ago with  senior council officials  and the Leader of the Council . We in Clitheroe know what we would be telling him -  we support the  police but the model of policing dictated by current Police and Crime Commissioner is not working. Retreating from rural policing,closing police station front desks in Clitheroe and Longridge leaving the largest geographical Borough in Lancashire with no public access is unacceptable. This vast rural area is starved of police resources and served from distant Colne and Blackburn.This policy is not working as a policing model as shown by the burglary of the council chamber.

Kevin Horkin a former member of the PCC Police panel and former  Chairman of the Ribble Valley Crime and safety Partnership, whose Clitheroe town centre shop was targeted by a professional shop lifting team last week commented, '' I am still waiting for the police to attend my shop to pick up the CCTV of the thieves that I put on line which has now been viewed by over 200,00 people and has been shared over 20,000 times. I believe that current police budget policy is a  totally political decision taken by the Police and Crime Commissioner to starve Tory represented areas which include the Ribble Valley of their fair share of police resources and direct them to areas which support his party. We are right behind the police and  sympathise with the lack of support from the top from this  Police and Crime Commissioner and see the need to increase the resources to stop the retreat from rural policing.”

''It beggars belief that burglars can break  into the building at the heart of our community. the Council municipal buildings and steal the family silver. These burglars took our heritage thousands of £ of valuable antique chains going back hundreds of years irreplaceable for the  Ribble Valley community without the forces of Law and Order being able to make an appropriate response.”

''The break in at the Council is a symptom of the rising tide of crime in Clitheroe shown by the break in my shop , robberies at Santander in Castle Street and the daylight raid on the Spar in Low Moor  when bold  thieves used a digger to rip an ATM machine out of the wall.''

Ken Hind added ''We will not sit on our hands and do nothing about it but lobby at local and national level for better policing and improvements in the resources available for police in Lancashire - above all make sure the Ribble Valley Police get a fare share of the police  budget to enable them  protect our homes and businesses. ''