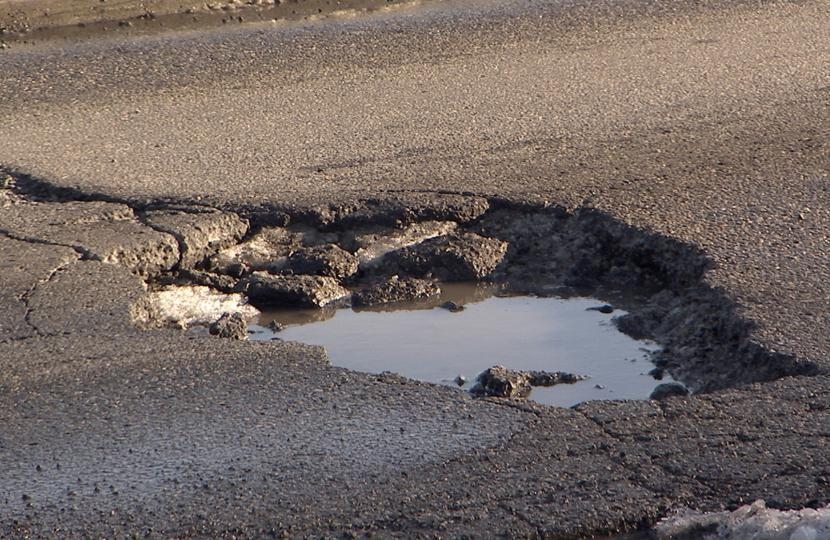 Ken Hind council leader of the Ribble Valley Borough Council welcomed the announcement to be made in the budget that local councils in England are to get an extra £420m to tackle a growing number of potholes.

Ken Hind commented .”Ribble Valley is the biggest rural borough in Lancashire with over half of our population living in rural villages and largely dependent on the use of cars in  their daily lives. We have more roads than any Lancashire local authority and have been pressing government along with our colleagues on the Lancashire County Council to increase the budgets available for our roads.”

“The money will go to tLancashire County Council who have the responsibility for roads but we at Ribble Valley will  pressing for an allocation which will properly improve our roads. In the past year Lancashire have recognised the need in Ribble Valley and we have been criticised by councillors and MPs from other authorities like Burnley as we have more funds for potholes. Burnley will fit geographically  into the Ribble Valley 6 times over which reflects the relative problems when it comes to repairing potholes “

‘’This is part of an announcement to be made by Philip Hammond Chancellor of the Exchequer in Monday's budget, alongside a £28.8bn fund to upgrade England's motorways. Mr Hammond will announce £25.5bn for Highways England for major road upgrades between 2020 and 2025 - largely funded by vehicle excise duty, or road tax.”

‘’It will be the first time the tax has been "ring-fenced" for use on the roads. This is in line with a pledge made by former Chancellor George Osbourne in 2015 An extra £3.5bn of "new money" will be allocated to major local routes, which fall under the remits of local councils.  Along with extra cash for potholes, councils will be given an extra £150m to improve road junctions on local roads”

‘’This does not mean that as a council we do not recognise the importance of public transport particularly buses in the rural areas and the train service to Manchester and reopening the passenger service to Hellifield to open links east to Yorkshire and west to Lancaster. Roads are only part of the solution to improving transport in the Ribble Valley’’