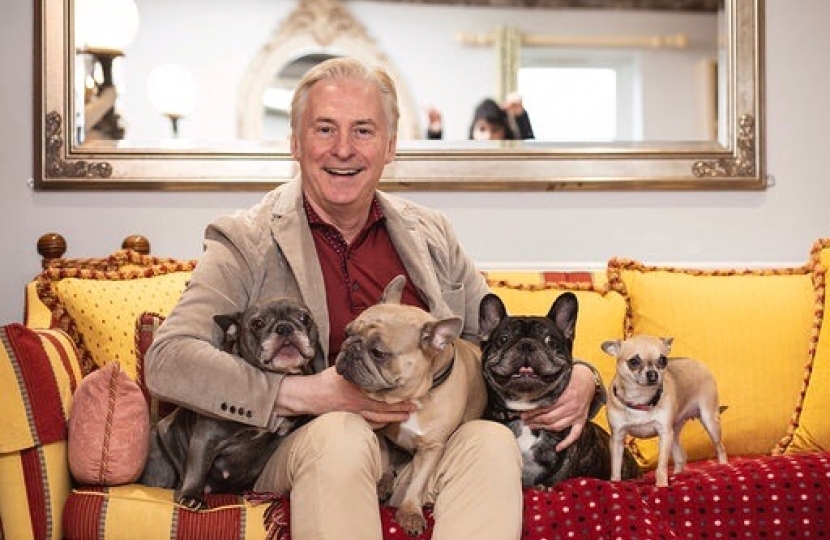 Dognapping is due to be discussed at the forthcoming meeting of the Community Safety Partnership due to take place next week on Wednesday 20th May.

Kevin Horkin, Ribble Valley Borough Councillor for West Bradford and Grindleton has issued a warning to owners of 'designer breeds'. Pet owners fear that dognappers may be operating across Lancashire after a number of pets have mysteriously gone missing in recent weeks. According to Kevin there is growing alarm, both locally and nationally, over the threat of dog theft.

Kevin believes that the rise in dog thefts could be down to a surge in popularity of so-called designer breeds and "fashionable" crossbreeds. A licensed breeder of French Bulldogs he adds that demand for dogs has gone through the roof since the first lockdown as families have found themselves at home with more time on their hands.

Kevin calls on Ribble Valley Borough Council to give the Issue much higher visibility through a Press, Social Media and Poster Advertising Campaign with useful advice made available on the Council WebSite. Kevin has prepared advice for Dog Owners below.

County Councillor Ged Mirfin, who is one of Ribble Valley Borough Council’s representatives on the Community Safety Partnership welcomes initiatives to raise the profile of the issue. Ged states, “Every day on Community Facebook Groups right across the Ribble Valley I seem to read stories about dogs that have been stolen, attempted dognapping or what is even more threatening the stalking of dog walkers and the casing of properties by members of criminal gangs prior to thefts taking place. It is extremely concerning. More needs to be done. I am extremely grateful to Kevin for the advice on preventative measures and what to do if their pets have been stolen that Kevin has drawn up which I will be taking to the Community Safety Partnership. This is something that Dog Wardens in the Ribble Valley can readily make available to the general public who we can forearm and forewarn about potential dognapping.”

Head of pet insurance at the firm Direct Line, Prit Powar, said: "The fashion for certain types of dogs means people are willing to pay thousands for an animal, which unfortunately makes them prime targets for thieves." The insurance company said the rise in the numbers of crossbreeds being stolen coincided with the rise in popularity of breeds like cockerpoos and puggles.

Many households have decided to add a new dog to their family meaning that responsible breeders and rescue centres in the UK, who have been working hard to adapt to the Government's changing guidelines, have been struggling to meet demand.

Kevin states, “It’s really concerning to see how many dogs are being stolen in Lancashire at the moment. I read every day on Facebook groups across the Ribble Valley of yet another instance of attempted dognapping. It’s really disturbing that it’s becoming a commonplace experience. I strongly urge anyone who believes their wonderful family pet has been taken to report thefts of animals to the police immediately.”

Kevin believes the rise in dognapping could be as a result of the surging popularity, and value, of certain ‘designer’ breeds and fashionable crossbreeds.

“I also advise owners never leave their pets tied up outside shops or alone in cars, ensure their gardens are secure with gates locked.”

He further advises, “Anyone who suspects their dog may have been stolen should immediately alert police, contact their microchip company to register their pet as stolen and inform local rescue groups, vets, dog walkers and neighbours."

Several dog owners in the Ribble Valley have posted pictures of their suspected stolen pets on Facebook to appeal for help to find their missing animals.

Kevin says that the theft of a dog can have a "massive" impact on owners, and some were now suffering from depression, anxiety and PTSD.

Demand for dogs has increased during the pandemic, pushing up the cost of some puppies from £500 to £2,000. The Kennel Club reported a 168% increase in people searching for puppies for sale on its website from the beginning of lockdown until the end of May, compared to the same period in 2019. And it is estimated thefts have risen by 250%, with criminal gangs involved. organised criminals have turned to dog theft as a rise in demand for puppies during lockdown meant increased profits from the illicit trade. Kevin points out that most of the dogs being stolen are female and are used for breeding, so criminal gangs can maximise their profits.

The top five most commonly stolen dog breeds in 2017 according to police reports, were:

And according to the Royal Veterinary College, the most commonly-owned breeds in the UK are:

Criminals are thought to be targeting puppy litters. Kevin states that in recent years the crime of dog napping had changed dramatically. “Years ago, it was people nicking dogs from outside shops," he says, “Now it's people targeting breeders, taking the mum and/or  the pups in one fell swoop." He says breeders are generally more rural-based, hence the rise recorded in police forces in rural areas. As well as breeding mums, working dogs, such as sheep dogs and shooting dogs also attract a high value - they are a ready-made, sellable product.”

The results of a BBC freedom of information request showed that five policing areas saw a double-digit increase in the number of dog thefts reported between January and July 2020, compared with the previous year.

Overall, about half of the 26 forces that responded to the BBC's data request saw an increase over the last seven months, while the rest saw fewer reports.

Five forces had more reports between January and July 2020 than the whole of the previous year.

According to data compiled by the insurance company Direct Line, 1,931 dog thefts were reported in 2018 - a "record high" - and only 17% of these dogs were returned to their owners.

Kevin states, “I've worked in the pet industry for over 35 years and it's the worst ever year I've known. Unfortunately, due to lockdown, people are at home more and they're looking for companion animals to take up their time. Sadly criminals  have capitalised on this. It's pushed the price of dogs and puppies up in general, which has inadvertently sparked a high rise in dog thefts." Kevin, who is Media Director of Our Dogs - the oldest canine publication in the world states, “Unfortunately in lockdown everyone wanted a dog and the prices went up and up. The criminals looked at those figures... and put two and two together."

Kevin is calling for for stricter penalties to deal with so-called “dognapping" -.upgrading pet theft to a more serious offence, meaning stronger penalties could apply. The maximum sentence under the Theft Act 1968, is currently seven years in prison. At present, dog theft is not defined as a specific crime, with dogs classed as "property", meaning the number of offences recorded may appear lower than in reality. But campaigners like Kevin say those who steal animals can currently be punished in the same way as someone who steals a mobile phone or a laptop.

Kevin says a tougher deterrent is needed. He states, “Dog mappers have taken a member of the family hostage and by not having anything in place which makes this a serious crime we are enabling the most emotionally draining thing to happen to people. Vulnerable individuals who have an unusually close and emotional relationship with this pets end up "living in limbo" when their dogs are stolen. Individuals are left heartbroken often affecting their mental health. It can be extremely distressing. There doesn't seem to be a big enough deterrent to stop people from stealing animals."

Kevin calls on the government to "ensure the value of pets is fully recognised in the law, as a real deterrent for those who may commit a crime that can have a devastating impact on pet owners and families By creating a specific offence of pet theft these cases could be both punished and deterred more effectively,. At the very least, the government should require the police and courts to specifically record the number of reported crimes, arrests and convictions for the theft of pets so the true scale of this problem is made clear."

In October, last year MPs debated the idea of making pet theft a specific offence, after 300,000 people signed a petition calling for this. The Kennel Club says less than 5% of cases result in a criminal conviction and that 52% of dog thefts take place in gardens.

In response the government reiterated that the theft of a pet was already a criminal offence under the act, under which the maximum penalty is seven years. Sentencing guidelines now take account of the emotional distress and harm that theft of personal items such as a pet can have on the victim and recommends higher penalties for such offences.

Kevin has offered the following preventative measures to avoid dognapping.

Advice to owners for prevention

If there have been reports of pets being stolen in your area, my advice would be don't panic, but it is wise to be extra careful.

Putting in place a few measures can help prevent your pet from being stolen or becoming a target.

Advice to owners if their pet is stolen

If the worst does happen and your pet does go missing or you think its been stolen, there are some steps you can take to have the best chance of being reunited with your pet.

Kevin is a specialist breeder of rare dogs. He imported one of the first Chinese Shar Pei dogs, famous for their wrinkly faces, into Britain, he was also the first to introduce the Neapolitan Mastiff into the North West with his dog, Louis, winning honours at Crufts. He is currently a breeder of rare French and Hungarian Blue Bulldogs. Although he can confidently talk about many different kinds of animals dogs, which he has an encyclopaedic knowledge of, remain his first and enduring love.

Kevin is a recognised Pet Expert with a wealth of experience and an established name in broadcasting and journalism. He has been a regular contributor and pet consultant to many TV programmes including This Morning. hosted by Richard Madeley and Judy Finnigan. Kevin worked on the programme for a 8 years just before its famous move to London. Through his Pet Role - Star Pet Agency he went on to provide animals for a number of T.V. Programmes.

Kevin is also Media Director of Our Dogs - the oldest canine publication in the world - a position he has held since the year 2000. Today Kevin uses his talents to promote responsible pet ownership. He is aware of the need for a wide public awareness of all our pet's requirements. He states that, "If we treat our innocent friends with love, affection and understanding, then the wonderful world of pets will enhance the lives of all responsible owners."