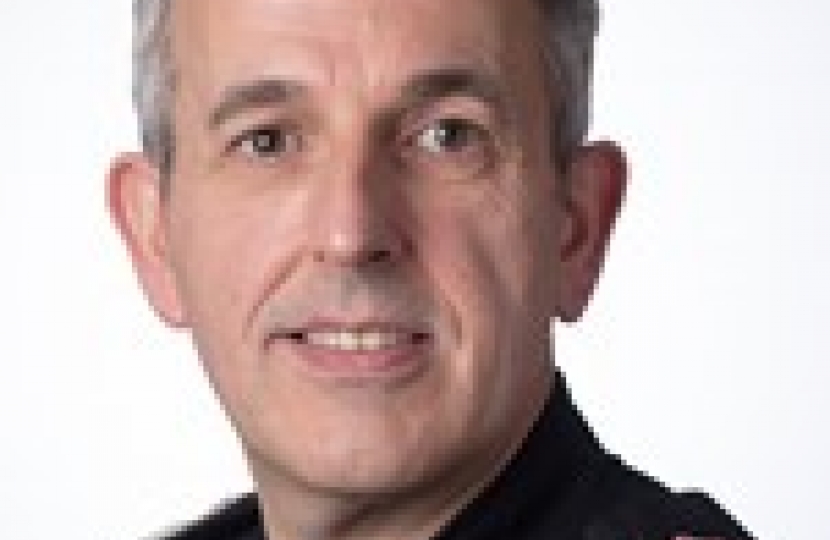 At the meeting of Ribble Valley Borough Council’s Parish Council Liaison Committee (which brings together Parish Councillors from across the Borough, Borough Councillors and Council Officers including the Chief Executive) which met on the evening of Thursday 24th June representatives got a chance to listen to a presentation on the Eastern Division (which includes Ribble Valley), headed by Chief Inspector Marie Jackson, who was also in attendance, given by the Inspector for the Ribble Valley, Andy Ainsworth, as well as an opportunity to grill the recent newly appointed New Chief Constable for Lancashire Constabulary, Chris Rowley in what proved to be a lengthy Q and A session.

He talked about his vision for Lancashire Constabulary going forward, the importance of strong collaborative working, and ensuring all our communities have a voice whilst delivering an effective, efficient service which supports victims of crime and makes our area safer. The Chief Inspector described his mission as being to encourage, participate in and develop strong partnerships with the public and other stakeholder agencies in order to fulfil the strategic priorities and key aims of the Police & Crime Commissioner’s Police and Crime Plan and reduce crime in Lancashire.

There was an admittance by both Inspector Ainsworth and Chief Constable Rowley that Ribble Valley hadn’t received the level of policing it deserved in the past and pointed to the belated establishment of a Rural Task Force of 4 Officers operating out of Clitheroe Police Station across Ribble Valley and Pendle launched with a splash of publicity by the defeated former Labour Police & Crime Commissioner as part of his election campaign.

County Councillor Ged Mirfin (Ribble Valley North East), who is also the Conservative Representative on the Ribble Valley Community Safety Partnership pointed out that 85% of the landmass of Lancashire was either rural or semi-rural and 18% of the population of Lancashire lived in rural areas but only 12% of the police force in Lancashire were stationed in rural areas. Nevertheless he welcomed the initiative pointing out the success of the Task Force demonstrated by the high number of arrests which had taken place over the last couple of months and the large number of crimes that had been solved. Councillor Mirfin stated, “This marks the start of the reversal of the process of the retreat from rural policing which took place under the former Labour Police & Crime Commissioner. There still exists a gap in Rural Policing in the Ribble Valley which needs to be bridged and more Police Officers are required across our Rural Villages and in our Service Centres  but at least recruitment is taking place and it is only a matter of time before we see more Police in the Ribble Valley.”

Borough Councillor Kevin Horkin, who represents West Bradford and Grindleton took up another issue in relation to Lancashire Constabulary’s admittance that it hadn’t done much in the past when it comes to the policing in the Ribble Valley in relation to Home Office funding for Special Crime and Policing Initiatives.

He asked the Chief Constable, “to address a broader point on home office additional funding outside of the general policing budget. When the government make additional specialist funds available to be bid for why does Lancashire have a poor success record in securing them?” Kevin also asked, “Do you have a specialist unit bidding for funds in place?”

Such multi-million pounds launched by the Home Office in the last 18 months which Ribble Valley has not been a beneficiary of because of perceptions of its apparent wealth and prosperity include:

Young people at risk of involvement in serious violence

The Chief Constable replied that funding was secured on a pan-Lancashire basis but acknowledged that more resources would be earmarked, including the Conservative Police & Crime Commissioner’s pledge to re-open the Police Front Desk in Clitheroe which, as Councillor Horkin pointed out, was the only major administrative centre in a Lancashire Borough not to have one. The Chief Constable, however, was willing to admit that he would like to have a Specialist Bid Team and would be engaging in conversations on this issue and others with the New Police & Crime Commissioner, Andrew Snowden, going forward.

Councillor Mirfin pointed out that another critical area where critical conversations were necessary both with the New Police & Crime Commissioner as well as Lancashire County Council was over the issue of Speeding and Dangerous Driving. Councillor Mirfin explained that the Lancashire Road Safety Partnership was not fit for purpose and required fundamental reform because the relationship between the County and the Police was dysfunctional because the two were talking at each other rather than engaging in a conversation about how the safety of Lancashire’s roads could be improved, particularly rural roads which received less of a priority than A roads. Consequently, the bar was being set too high and it required either a fatality, serious injury which generally took place following a serious Road Traffic Accident thus preventing sensible Road Improvement Measures like Traffic Calming Measures; Speed Reduction Measures, Speed Monitoring, Improved Signage, Reduction in Speed Limits and an increased Police presence.

The Chief Constable revealed that detailed conversations had already been taking place between himself, the Police & Crime Commissioner, Andrew Snowden, the Cabinet Member for Highways & Transport at LCC, Charlie Edwards and Senior Officers in the Highways Team to look at how policy could be improved and much needed reforms put in place so as to make the authorities much more responsive to public concerns about Speeding on Lancashire’s roads - the 8th worst in the country for accidents.

The Chief Constable invited Councillors Horkin and Mirfin to a bilateral meeting with him at Police Headquarters to discuss how the agenda might be moved forward and any ideas they might propose to improve the situation including Councillor Mirfin’s suggestion that an Annual Programme of Measures to Tackle the problem of Speeding on identified Roads across the County could be delivered over a number of years to improve the safety of the County’s roads improving Lancashire’s dreadful position on the Performance League Table.

Councillor Horkin states, “Such a Meeting would be a positive for the Ribble Valley. It shows the Chief Constable is already listening and is willing to listen to arguments about how Policing in the Ribble Valley can be improved in the future. I welcome comments from the Chief Constable. He recognised that the Ribble Valley was a poor relation when it came to Policing resources. At least he acknowledges that and more funding via the Police & Crime Commissioner will be coming Ribble Valley’s way. This is not just an aspiration and we can look forward confidently to the reopening of the front desk in Clitheroe becoming reality. Indeed the Chief Constable talked about the possibility of a pop-up Police Counter opening up in shop frontage in Clitheroe which would be more accessible to the public.”

Councillor Mirfin states, “This was an extremely positive start from the Chief Constable. I look forward to meeting with him and floating new ideas. This is such a refreshing change from working under the last Police & Crime Commissioner regime where there was a palpable move away from rural policing which severely disadvantaged Ribble Valley. At the end of the day this is ultimately about ensuring that Ribble Valley receives its fair share of Policing Resources. As current and former members of the Community Safety Partnership you can assured that Councillor Horkin and I will continue to press this point forcefully but in a constructive manner. It is a positive that Chris Rowley appears to be in listening mode.”