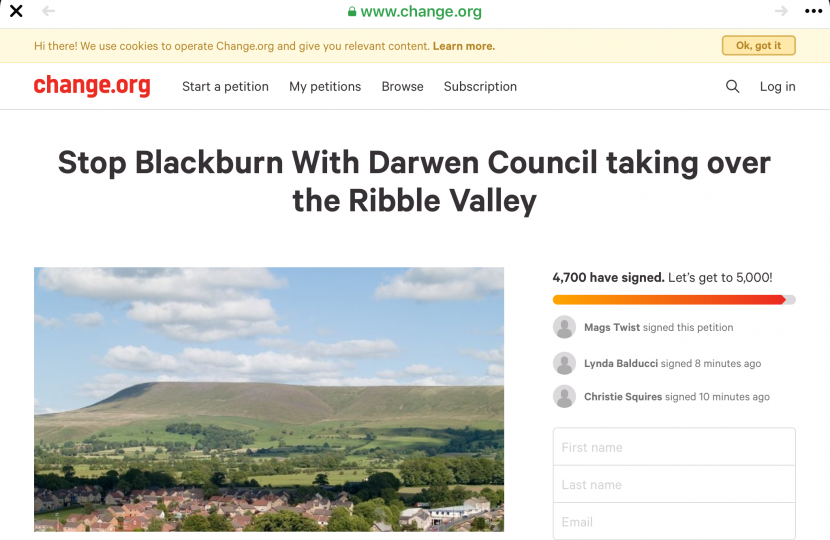 Blackburn with Darwen Council have proposed a Super Council, which will absorb the current Ribble Valley. We Valley residents stood firm last time this was proposed... Its time to do so again. We will NOT be accepting this. We want to remain Separate and Independent.

The proposal is ridiculous. The Ribble Valley is NOT up for being split up, amalgamated with anyone.... We are staying just as we are. BACK OFF BLACKBURN!

Councillor Ged Mirfin the Deputy Chairman Political Campaigning of Ribble Valley Conservative Association states   ''At time of writing 4,685 Ribble Valley residents are making it unequivocally clear that they do not want to be forcibly dragged into a Greater Blackburn Unitary Authority against their will. We have seen other similar petitions in Lancashire opposing a Blackburn Unitary Authority which have been launched on Change.org including one on a number of Community Facebook Sites in Burnley which currently has over 700 supporters. We encourage MPs from all sides to look at the comments to see the frustration and anger of Local Residents.”

Councillor Mirfin continues, “I seriously wonder whether Politicians at a National, Regional and Sub-Regional Level have learnt anything at all from Brexit. Identity is now at the very core of political debate. Local Identity Politics is even more important to Local People especially when critical decisions like weekly bin collections, not charging additionally for Green Waste and access to a high performing Council which ranked in the top 10 Councils in the Country for delivering business support grants to Businesses struggling during the Covid pandemic affect people’s lives in a personal way. A significant distrust of politicians and institutions has grown up in this country fuelled by a sense among large numbers of the general public that they no longer have a voice in the national and in this case the local conversation.”

Councillor Mirfin concludes, “What this petition does is to send a very clear message that really big decisions affecting people’s lives require active public consultation not decisions forced upon them taken in now thankfully smoke-free rooms hidden away from public eyes. At the end of the day the general public don’t like things being done to them and when they do raise their voices what they say comes as a rude awakening to some of our political elites. Ribble Valley Conservative Association therefore welcomes Emma Dickinson- Gater's  initiative on behalf of all sections of  the Ribble Valley and urge all local residents to sign the petition.”

“Councillor Atkinson continues, “The 4,685 Signatories who have signed Emma Dickinson-Gaters petition to date shows that the support and appetite to determine the future of the Ribbe Valley is very strong.''

David Peat, The Chairman of Ribble Valley Conservative Association and a Ribble Valley Borough Councillor states, “We always knew the strength of feeling about preserving the identity and integrity of the Ribble Valley. This was a key commitment in our Election Manifesto for the Borough Council Elections in 2019 in which we were returned victorious. It comes as no surprise therefore that the residents of the Ribble Valley should wish to express their opinions so volubly. What does come as a surprise is that they did so so quickly. For over 10% of the Voting electorate to sign the petition in under 48 hours is frankly astonishing but at the same time demonstrates their strength of feeling and opposition to a Greater Blackburn Authority. Ribble Valley Conservative Activists have actively helped to spread the petition. .”

Councillor Stephen Atkinson Leader of the Ribble Valley Borough Council comments, Cllr Atkinson said: "I am very disappointed that some council leader’s have used the opportunity of the debate over the future of a Combined Authority to go a giant step further and set out their plans to reorganise the local government structure in Lancashire. Speaking for the residents and businesses of Ribble Valley I can’t see any desire to be taken over by a Greater Blackburn or any one else. I will do my best to protect the independence of Ribble Valley, until the residents of the Ribble Valley tell me different."'

Ribble Valley Conservatives will lobby MPs and government to argue forcefully for the retention of RVBC. Nigel Evans Ribble Valley MP  has been forcibly lobbied about the strong local views of residents and asked to make ministers aware of the strength of feeling on this issue.

Ribble Valley Conservatives welcome the announcement by County Councillor Phillippa Williamson , Lancashire County Council  Cabinet Member responsible for schools, who has just  announced a  consultation on the construction of a new primary  school on the Standen Estate in Clitheroe.