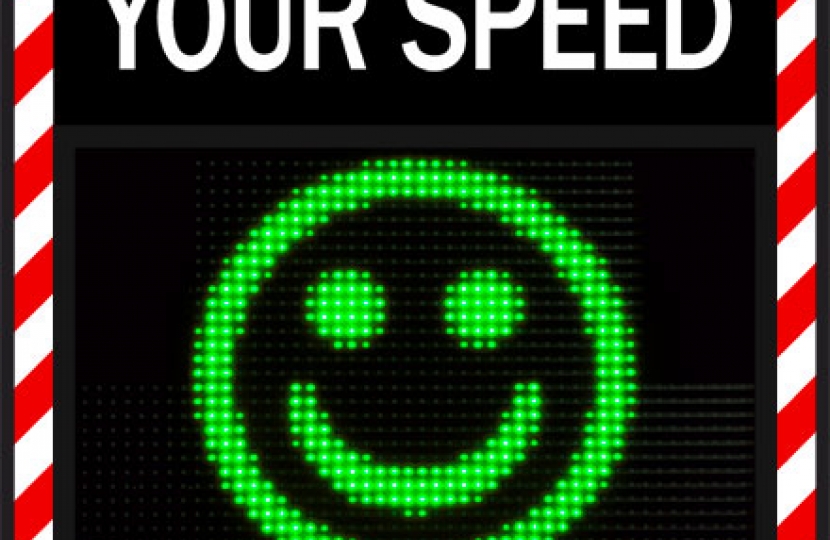 Speed Indicator Devices (SpIDs) are the ultimate in nudge technology. Nudge is a concept in behavioural psychology which proposes indirect suggestion as ways to influence the behavior of groups and individuals. SpIDs raise driver awareness of the speed they are travelling at, by displaying vehicle speed. They may also display a smiley or sad face depending whether you are above or below the speed limit. SpIDs are normally deployed for short periods on stretches of roads where there have been complaints by large numbers of local residents about speeding motorists or dangerous driving. It is the case that SpIDs lose their effectiveness if they are kept in one place too long.

But do they work? Do they really nudge drivers to slow down because a frowning emoji suggests that they are exceeding the speed limit? Are they in fact an expensive and complete waste of time?

Councillor Ged Mirfin who represents Whalley and Painter Wood and is the Conservative County Council Candidate for Ribble Valley North East which includes Whalley states, “SpIDs are an educational or awareness raising tool, and there is no enforcement element in a SpID. There is no consequence for the driver speeding past a SpID, other than a frown. SpIDs are an educational tool. They remind drivers about speed, and help encourage appropriate driving behaviour but they do not deliver enforcement where the speed limit is being deliberately flouted.”

Lancashire County Council currently operates a traffic light system in relation to stretches of roads where there have been a significant number of representations made by local residents about particular stretches of roads. Green is the stage at which LCC gathers further information encouraging Local Action Groups to present detailed information to County in the form of written reports from local residents and traffic surveys but generally to know the size and scale of campaigns on the ground and how vocal and resilient they are.

According to Councillor Mirfin, “I suspect this is done deliberately in the hope that the group’s will dwindle and go away. Many are being simply ignored and nothing is getting done. Some of these groups have been in existence for a very long time indeed and Speeding is a perpetual issue on the agenda of Parish Councils leading to frustration and ill will on all sides - particularly the local residents who pay for the roads with their Council and Vehicle Excise Duty. 17 stretches of road have been identified by local residents as causes for concern 11 are currently on Green with only 1 being the subject of further investigation by the County.”

“The problem is that once the SPID or Temporary Signage is removed things quickly return to normal. It is though nothing has changed. Nothing is achieved and the problem continues as before. I don’t understand why County can’t respond to public concerns and move straight to a reduction in the speed limit on dangerous roads or speed reduction or traffic calming measures like speed bumps or rumble strips.”

Councillor Mirfin further continues, “In only one location has the County saw fit to award a stretch of road Red Light status - on the A59 in Gisburn carrying out Local Road Works and putting in place traffic calming measures but en there they have only put in place Temporary Signage. I don’t understand what is going on?”

Councillor Mirfin concludes, “This is why I question the validity of SpIDs. There are a higher number of SPIDs being used on Lancashire’s roads than in many other parts of the country. I just wonder if they are a cost effective tool given the amount of money that is being spent on them and wonder whether there is a better way of doing things. SpIDs currently cost in the region of £2-3,000 per device plus of course the installation and manpower cost and replacement batteries and charging. The question I would ask is would the safety on Lancashire’s Roads not be better and more rapidly improved by reducing the speed limit on dangerous stretches of road and introducing permanent speed reduction and traffic calming measures?”

“It is for that reason that I have issued the following Freedom of Information Request to Lancashire County Council to ascertain whether SpIDs are cost effective (just because they are cheaper does not make them more effective than physical traffic calming or speed camera enforcement) and they are delivering the kind of changes on Lancashire’s Roads that was hoped for nudging motorists to change their behaviour.”

“The Questions I have posed are:

In how many instances broken down by year and local authority did this lead to a change in the Speed on the road on which the SpID was deployed or the introduction of speed reduction or traffic calming measures on a permanent basis?”

“In other words do SpIDs deliver or should they be mothballed to save money with the money saved used for other speed management schemes?”