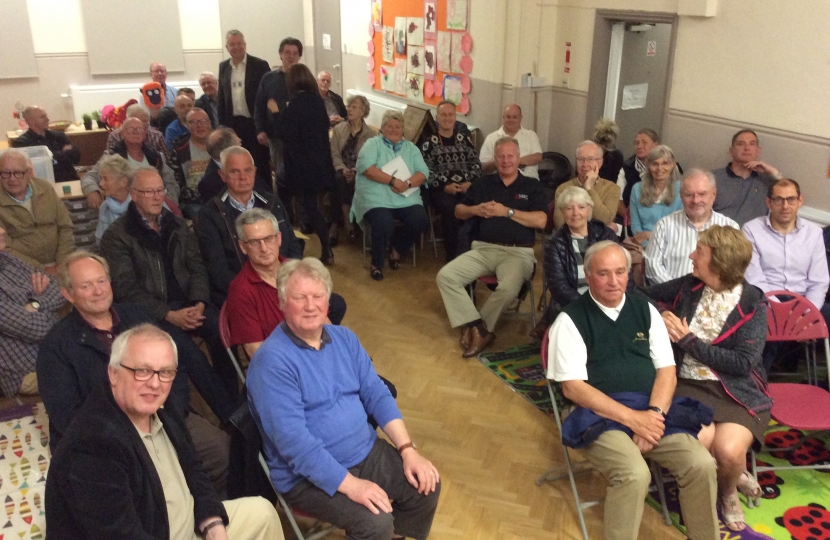 Conservative Councillors for the Whalley Painter Wood Ward, Cllrs Mark Hindle & Ged Mirfin called a Public Meeting which took place on Monday 17th June in the Old Whalley Grammar School to solicit opinion from local residents on the recent application 3/2019/0448 land at Wiswell Lane, Whalley made by Gary Hoerty Associates on behalf of V H Land  Partnership for 125 houses on land at Wiswell Lane, Whalley which is actually in the Wiswell & Barrow Ward. A packed meeting was attended by over 60 residents from Whalley, Wiswell And Barrow.

The site lies adjacent to the north eastern end of the built up area of Whalley. The northern and eastern site boundaries are defined by the A59 and by the A671. The southern site boundary is along Wiswell Lane. The application site is situated approximately 1.2km from the centre of the village of Whalley.

A number of issues were raised by local residents including:

* dangerous traffic movements on Wiswell Lane, the A671, Accrington Road and the A59

* pressure on infrastructure in particular on local schools and doctors surgeries

Residents can also make their objections to the application known by:

* inputting their objections directly into the Planning Portal at:

* by emailing Nicola Hopkins, the Director of Economic Development & Planning at:

* by writing to the Director of Economic Development, Nicola Hopkins at:

stating the reference number of the application

Or, preferably a combination of all three.

Cllr Ged Mirfin states, “It was vital that Local Councillors were able to solicit the views of local residents on this worrisome application and offer advice on how to object based on planning reasons which would carry weight with the planning authority when it came to reaching a decision on the application. I was particularly pleased to such a large turnout on a Monday evening from people who care passionately about their community and understood the issues in a way which provided valuable context for local councillors when it comes to arguing their case further.”

Cllr Mark Hindle states, “ I was pleased at the outcome of the meeting. t was important it took place so that local residents were able to articulate their views and make their voice heard in a friendly convivial setting. I feel this was truly local democracy in action.”