Member of Parliament for Ribble Valley

Nigel stayed in his birthplace of Swansea to attend Dynevor School and then University College, where he received a BA (Hons) in Politics. He owned a convenience store in Swansea, which his grandfather set up in the 1930s. The Evans family continued to run the store until 2012.

In the 2019 General Election, Nigel saw his majority increase to 18,439 - his largest ever. His vote share was the largest in the Ribble Valley's history.

Nigel worked as PPS (Parliamentary Private Secretary) to the Rt Hon David Hunt MP while he was Employment Secretary and Chancellor of the Duchy of Lancaster between 1993-1995. He was then PPS to Tony Baldry MP, the Ministry of State for Agriculture, from 1995-1996 until he became PPS to the Rt Hon William Hague MP, Secretary of State for Wales, in 1997.

On 8th June 2010, Nigel was elected as one of three Deputy Speakers of the House of Commons. It was the first time elections had been held for the roles and Nigel topped the poll. He served as First Deputy Chairman of Ways and Means until September 2013, when he returned to the back benches.

In January 2020, Nigel was again elected as one of three Deputy Speakers, and continues to serve as Second Deputy Chairman of Ways and Means

Nigel Evans is inviting everyone in The Ribble Valley to get involved in UK Parliament Week and join a UK-wide conversation about our democracy, people power and making change happen. 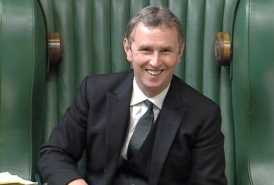