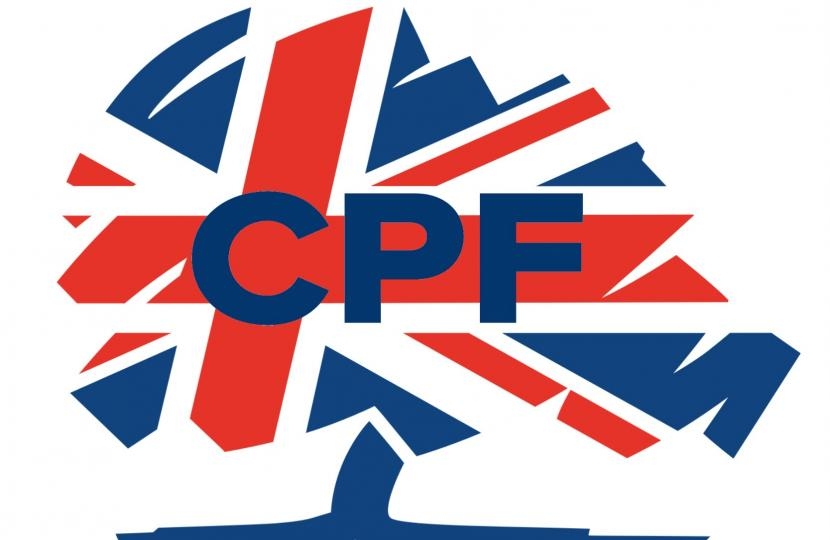 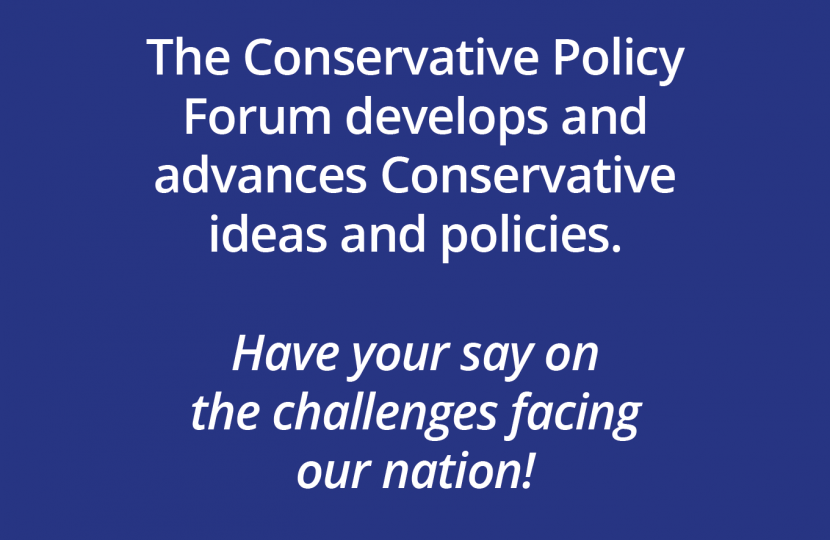 "The CPF plays a key role in ensuring that Party members‎ have the opportunity to help shape Government Policy. We need to make the most of all of the talent that exists within our Party, and harness our members' enthusiasm." (Prime Minister Theresa May)

The CPF is a national Party group that gives members the opportunity to discuss the major policy challenges facing Britain. With almost 250 active groups across the country, a fantastic voluntary team and strong professional support from CCHQ, the CPF has a vital role at the heart of the Conservative Party. With a direct line to the Prime Minister's Policy Unit and Government Ministers, a programme of regular national policy discussions, members' surveys and video conferences with leading members of the Party, its members have a real say in the direction our Party is taking.

A Pack explaining more about the CPF, what it does and how you can get involved can be downloaded below.

CPF Members have played an important role in recent years, providing a number of ideas that have gone on to become Party and Government policy, and the work of its members out on the ground made a real difference to the outcome of the 2015 and 2017 general elections. There is a genuine recognition at the top of the Party that the views of members need to be sought and heard.

As we implement our Conservative manifesto and start formulating our vision for the years ahead, it is as important as ever that we demonstrate how only the Conservatives will make the difficult decisions needed to secure a better and brighter future for Britain.

The CPF is a national Party group that gives members the opportunity to discuss the major policy challenges facing Britain. It is chaired by George Freeman MP.  With active groups in every region, the CPF is a fantastic way for Members of the Party to have their voices heard on some of the most important issues facing our country.

The Forum aims to publish five discussion briefs each year (that is, one every other month, with a break for May elections and the in August). Since relaunching after the 2015 general election, the Forum has collected policy suggestions from about 250 different groups, representing around 300 constituencies and over 3,000 members and supporters – all of which were summarised and sent to the Prime Minister's Policy Advisers and to Conservative members of Cabinet. These, in turn, all received a formal ministerial response and have resulted in ongoing policy development behind the scenes. In addition to this, we also engage with our members through monthly members' surveys, online video conferences with leading members of the Party, and various regional and national events.

Through this work we very successfully fulfilled our remit of helping the Party to identify the problems we will face during the next Parliament and, crucially, to address how we can secure a better future for Britain and for hardworking taxpayers. Many CPF groups also contribute to debates on local issues and actively participate in campaigning in their constituencies.

The CPF’s history can be traced back to the Conservative Political Centre of the early post-war years. This made a significant contribution to the development of election-winning policies that delivered thirteen years of radical Conservative Government from 1951 to 1964. Building on this heritage, our aim is to create a truly national Forum, accessible to all regardless of age or location that has real influence on Party policy.

There is a CPF professional team in CCHQ to support you, so please feel free to get in touch if you are interested in joining or forming a CPF group or if you would like to know what you can do to help to ensure we continue to elect Conservative representatives at both local and national level.

In Ribble Valley Conservative Association the Deputy Chairman (Political), Ged Mirfin is also the Conservative Policy Forum Coordinator. He can be contacted via Email via ged.mirfin@gmail.com and is the first point of contact to ensure that members' policy concerns are heard.

Ged is a former academic - a Political Economist/Scientist of many years standing who taught at three Universities before leaving academia to pursue a career as a Data Analyst and Marketeer. He is the author of a wide range of publications on a variety of Political Topics in his own right which can be viewed via the following: https://www.slideshare.net/CllrMirfin/documents

Ged's most recently published Paper is entitled "Political Hypocrisy: Magical Realism and the Death of the Political Actor. This is a Paper which discusses the concept of Political Hypocrisy from a number of different perspectives including that of magical realism for the first time. It focuses on approaches taken by David Runciman: Political Hypocrisy: The Mask of Power, from Hobbes to Orwell and Beyond, John Mearsheimer: Why Leaders Lie:The Truth About Lying in International Politics, Peter Oborne: The Rise of Political Lying, Michel Foucault: Truth and Power, Colin Crouch: Post-democracy, Martin Jay: The Virtues of Mendacity: On Lying in Politics, Sophia Rosenfeld: Hypocrisy in American Political Attitudes.

Another of his most recently published paper is entitled: “Political Inertia”. This is a paper which analyses the concept of Political Inertia from a number of different theoretical perspectives including Adversarial Politics, Consensus Politics, Failure to Deliver Economic Growth, Sequencing of Political Democracy, Social Acceleration, M|ixed Economy Models, Path Dependency, the Winner-Takes-All-Politics thesis, Political Drift, the Political Science of Lobbying, the Off-Center Republican Revolution Thesis, the Captured Economy Model and Economic Rent Seeking and the Decline of Nations Thesis and the Logic of Collective Action.

Another recently published paper is entitled: “Political Arrogance”. This is a Paper which discusses the concept of Political Arrogance. It seeks to do this by reference to the UK context. It focuses on the notion of political immaturity and political arrogance as a block against political change. It focuses on the gap between belief systems and emergent political reality – and the notion of an Outmoded Worldview. It looks both at those Prime Ministers that have been behind the curve of history and those that have sought to pre-empt it. It uses as a case study example the 2017 General Election before showing that political arrogance is a mark both of strength and weakness when utilised in different circumstances. It then goes on to discuss how political arrogance can morph into hubris. It concludes that a gap has opened up between mass and elite publics because of politically arrogant behaviour arguing that this is likely to result in political instability which is only likely to be resolved by a large scale replacement of the political elites.

Yet another recently published paper is entitled: ”Political Authenticity: Villains or the Virtuous” which has received some media attention. The paper presents a wide-ranging analysis of the concept of Political Authenticity. It focuses on the concept of charismatic authority. It seeks to differentiate between true and false political authenticity and agues that it has become a media construct, a P.R. tool to enable politicians to scale the heights of power. It further argues that charismatic leaders espousing political authenticity are part of the counter elite who have emerged from the political establishment at times of political crisis.

Ged has also recently published a paper entitled “The Death of Aspiration: The End of Work and the Emergent Culture of Middle Class Discontent”. This is a paper which addresses the issue of how middle class aspirations are being thwarted by the impact of technology (automation) on work. It draws on the work of Edward Luttwak (Turbo Capitalism), Jeremy Rifkin (the End of Work thesis); John Kenneth Galbraith (the Culture of Contentment) and Robert D. Putnam (Social Capital). It address the central paradox that the middle classes are being attracted to anti-status quo populist political movements at one and the same time as favouring status quo communitarian politics. It concludes by arguing that the nature of politics and political parties will change fundamentally with the emergence of a new form of factionalised based caucus politics which will be much more localised in nature. It suggests that this will lead to tensions within sub-regional Combined Authorities in the UK.

The paper was highly referenced in the U.S. media during the U.S. Presidential Election.

Ged recently published a Policy Paper for Conservative Voice entitled: “What didn’t Emily Know? : White Van Man Culture, Middle Class Condescension, Moral Panics: the importance of White Van Man Drivers to the Economic Recovery and defeating UKIP” which was commissioned by Conservative Voice and addresses the issue of the Political Disenfranchisement of Globalisation amongst the victims of Globalisation – the disadvantaged and insecure working and middle classes in the context of the Revolt on the Right and Blue Labour theses amongst others.

Ged won 2 International Recognition Awards for the Paper which was the most mentioned Politics paper on Twitter in the Month that it that it was published and the most viewed Politics Paper on Slideshare Globally in the three months following its Publication. The Paper is the most viewed and Downloaded Policy Paper authored by a member of the British Conservative Party in 2014 and also in the first half of 2015. The Paper has been viewed and downloaded approaching 10,000 times across a variety of media.

Ged has also recently published a high profile Policy paper for Conservative Voice entitled: “A High Wire Balancing Act – Reshuffles, Reform, Modernization and Policy Making in the Coalition: UKIP & Cameron’s Attempt to Overcome the Limitations of Electoral Groupthink. A Paper commissioned by Conservative Voice on the Cabinet Reshuffle of July 2014 which looks at the Electoral & Socio-Demographics behind the Reshuffle, the continuing impact of UKIP and the Constraints on Reform, Modernization & Policy Making in the Coalition Government and the forces that have shaped David Cameron's behaviour as a Prime Minister. It has been viewed and downloaded approaching 7,000 occasions across a variety of media.

Ged has also recently published a high profile paper on the Oldham West & Royton By-Election which was the most widely downloaded paper during the course of the by-election which was used extensively as a reference by national journalists from The Financial Times as well as The Guardian.

The paper has been downloaded over 5,000 times across all media.

Some of Ged's Papers are downloadable below: