25th Anniversary Of Trains To Clitheroe 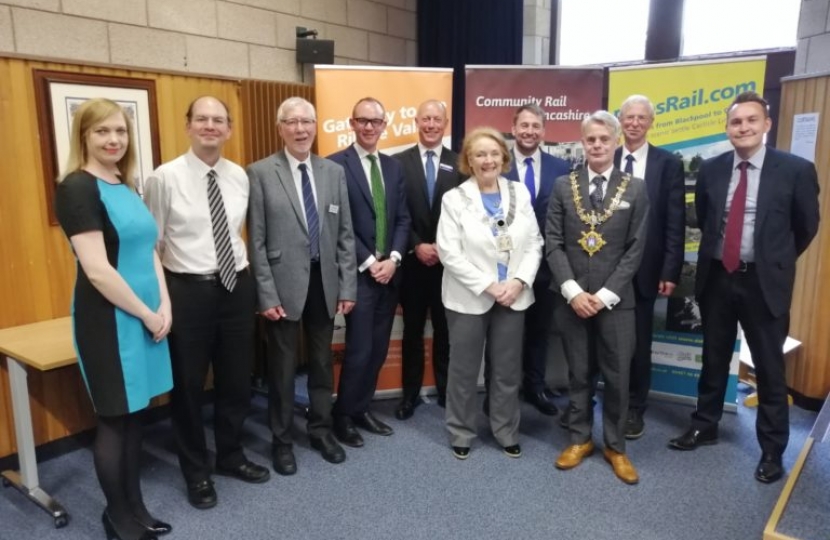 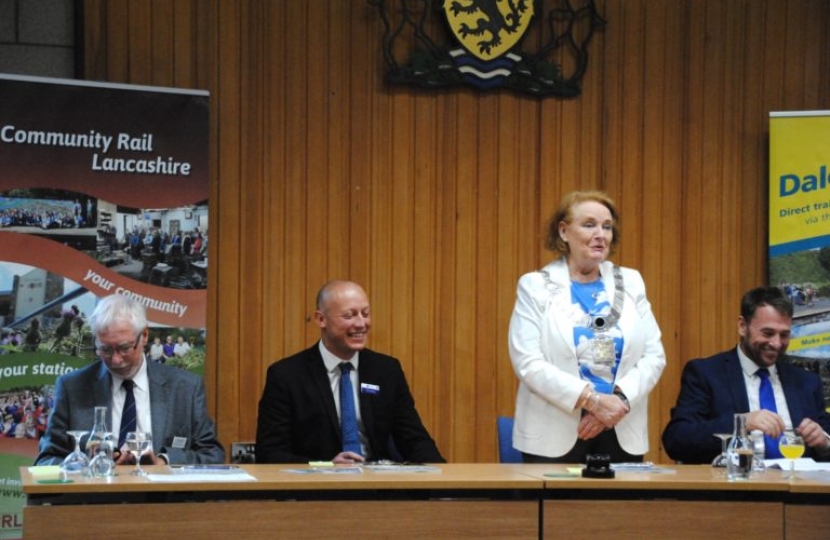 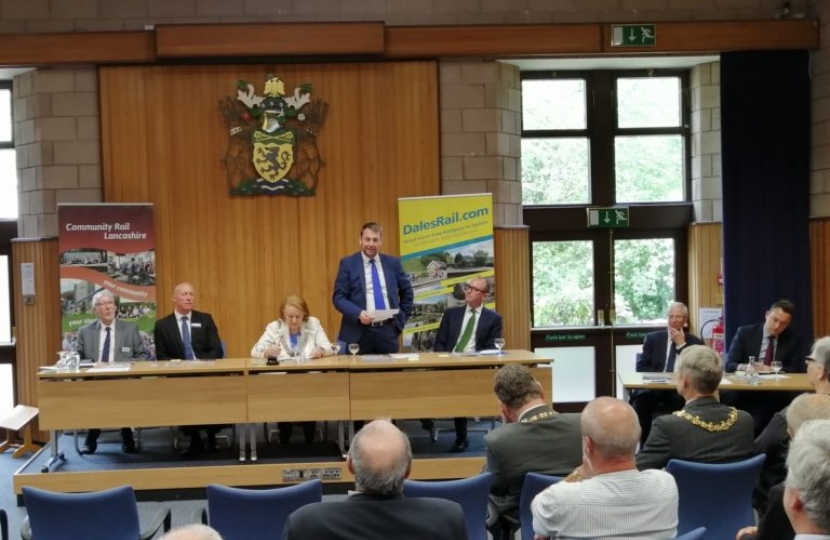 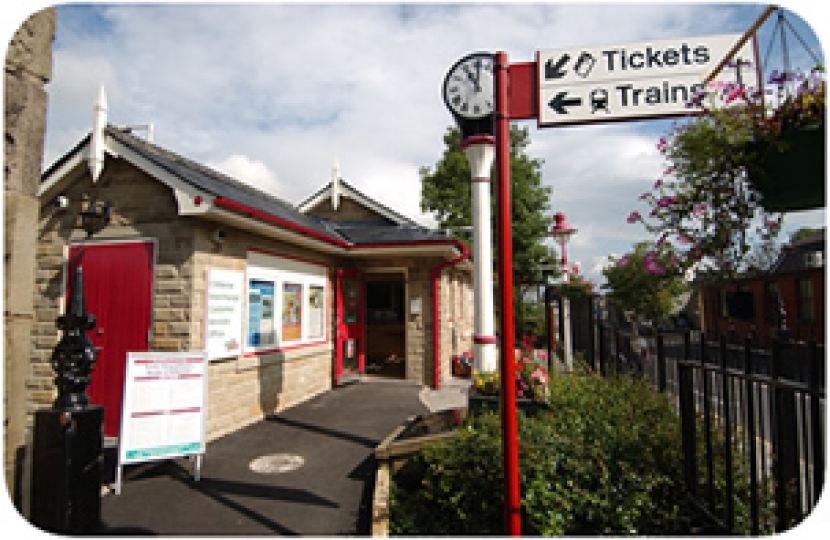 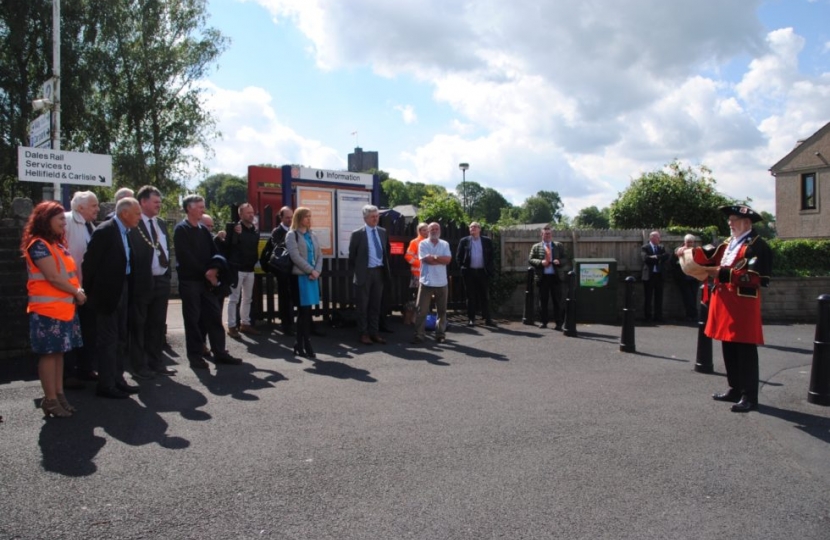 30th May, 1994 saw the restoration of a regular train service between Blackburn and Clitheroe calling at new or refurbished stations at Ramsgreave & Wilpshire, Langho and Whalley.

To mark the occasion Community Rail Lancashire held a reception in the Ribble Valley Council Chamber on Thursday 6th June which brought together the people and organisations involved in the restoration of the service back in 1994 and have overseen its subsequent development.

Clitheroe Interchange is operated and maintained by Lancashire CountyCouncil. All trains are run by Northern.

The original station opened on 22 June 1850. It was replaced in 1893/4 by another approximately 220 yards (200 m) to the north. The station closed to normal services on 10 September 1962 (that is, before the Beeching cuts) but remained in use for special services until 7 February 1971. The special services resumed on 14 May 1990, and the station was fully reopened on 29 May 1994, when passenger services began again from Blackburn.

The station has since become an award-winning bus and train transport interchange. The bus station, known as the Clitheroe Interchange. It is the terminus for bus connections bringing passengers from towns and villages in the Ribble Valley to Blackburn and Manchester. It is manned six days per week Monday to Friday 06:45 to 17:15, Saturday 08:00 to 15:30 closed Sundays). There is generally an hourly service daily from Clitheroe to Rochdale via Blackburn and Manchester Victoria.

Ribble Valley Conservatives have been calling for a half hourly service to Manchester Victoria, a Direct Service to Preston, a re-opening of the line to Hellifield permitting the re-instatement of a Direct Service Skipton and beyond to Leeds and New Rolling Stock in particular New Carriages for some time 2 years ago Ribble Valley Borough Council started to campaign through its Newly Established Economic Development Committee for Improved Rail Connectivity and more frequent Trains in particular to benefit workers, students and visitors by strengthening travel to work areas and benefitting leisure and tourism in the Ribble Valley by bringing more shoppers and tourists to Whalley and Clitheroe.

Lancashire County Council have made a commitment to significantly improve the service to two trains an hour on the full route, by working with Transport For the North (TFN) to do a business case for Northern to implement this change within their current franchise. This will be a huge benefit to all commuters and visitors alike, in this beautiful part of our County.

County Cllr Andrew Snowden, Lead Member for Highways and Transport states “One thing discussed at the event was the re-opening of the line to Hellifield. This would require significant capital works at Hellifield station and two additional trains to be bought. So, whilst it’s something people are discussing, it would require quite a bit of investment - requiring Transport for the North to do a major business case. TFN are responsible for seeing if the numbers stack up and then will have to apply for Central Government Funding.” 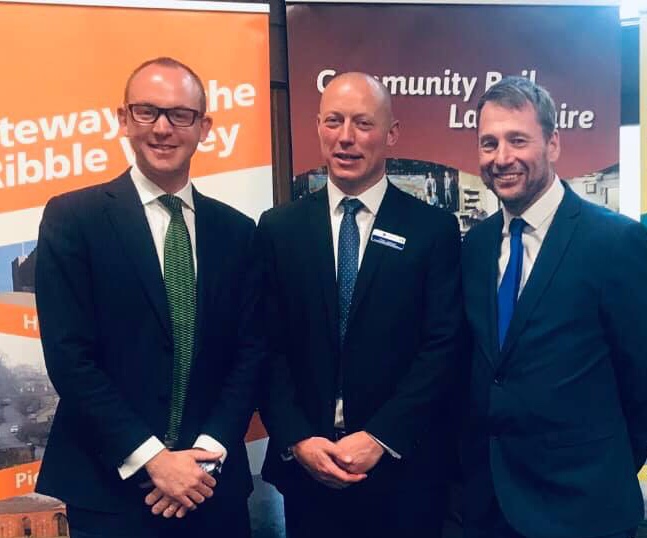 The Ribble Valley Line from Blackburn also joins the Leeds to Morecambe Line at Hellifield which is managed by Northern, who provide all passenger train services. It is unstaffed, although the buildings are in private use and open to the public at certain times.

The line from Blackburn had its local passenger service withdrawn on 10 September 1962, but it remains open for goods traffic and periodic diversions when the West Coast main line is closed north of Preston for engineering work. Thereafter it was downgraded to unstaffed halt status and served only by stopping trains between Leeds and Morecambe.Trains to and from Carlisle also started calling again in May 1995 to further encourage use of the station and its newly restored amenities.

There is a regular service each day from Hellifield to Leeds and to Carlisle and Lancaster. There are fourteen services southbound on weekdays and fifteen on Saturdays (of which one runs only to Skipton). Northbound there are eight trains each trains to Lancaster and to Carlisle plus one evening service to Ribblehead  – these run about every two hours. Five of the Lancaster trains run through to Morecambe. On Sundays there are six trains to Carlisle, five to Lancaster and eleven to Leeds, one of which continues to Nottingham.

Also on Sundays in the summer, a train operates from Blackpool North, Preston and Blackburn and along the Ribble Valley Line via Clitheroe to Hellifield and onwards towards Carlisle. This service, 'Dalesrail', is operated by Northern. There are plans for more services from Clitheroe.

Cllr Atkinson stated at the event, ““As a Council we were a part of bringing the railways back to Ribble Valley and it’s a real pleasure to celebrate that achievement. Our communities seek better and more reliable connections to the wider world and our Economic Partnership has highlighted the importance of good rail links for a prosperous future. We will continue to work with partners to ensure transport is high on the agenda and are particularly keen to see a shift to half hourly services to Manchester and direct connections to Preston and the West Coast “

Cllr Andrew Snowden, lead member for Highways and Transport, stated, “I was absolutely delighted to be part of these celebrations and announce that our officers are now working with Transport for the North and the Rail North Partnership to develop the business case for two trains to run hourly along the Clitheroe to Blackburn line.

Cllr Snowden continued, “We’ve also been involved in several successful projects, which include the Sunday Ribble Valley Rambler, linking Blackpool and Preston to Hellifield with connections to/from services on the Settle Carlisle line, school engagement projects and marketing initiatives such as the ‘Gateway to the Ribble Valley’ campaign.”

He concludes, “The council is also part of the ‘Connect East Lancashire’ project with Blackburn with Darwen Borough Council where schemes to improve the stations at Clitheroe, and Ramsgreave and Wilpshire, are being looked at.”

David Hoggarth, Strategic Rail Director for Transport for the North, stated, “Transport for the North is delighted to be able to help celebrate the success of the Ribble Valley line and the service which has connected the town of Clitheroe to Manchester over the last 25 years. Good connectivity across the North is vital if we are to thrive as region and grow our economy. The campaigning for the reopening of the line from Blackburn, and the championing of the service for a quarter of century, showcases the real benefit of a community working together with local authorities, elected members and the rail industry to achieve a goal that supports social, economic and environmental objectives. I want to congratulate everyone involved in this project. It’s a great example for others to follow.”

Chris Jackson, Regional Director Northern, commented, “It’s fantastic to be able to celebrate 25 years of continuous rail services between Blackburn and Clitheroe. The return of these services, in 1994, provided a lifeline for local communities and Northern is justifiably proud to be part of that community and the anniversary celebrations.”

Richard Watts, Chair, Community Rail Lancashire stated, “Today is a celebration of 25 years hard work in developing the Clitheroe Line which plays such an important part in the lives of the many people who depend on it.”