Here you can find the latest news, information about us, what we are doing and what we believe in. The Conservative Candidate for the Ribble Valley is Nigel Evans. We're here to help, so if you'd interested in joining, getting involved or just to find out more, please get in touch on 01200 425 939 or to join please use the form on the Membership page. 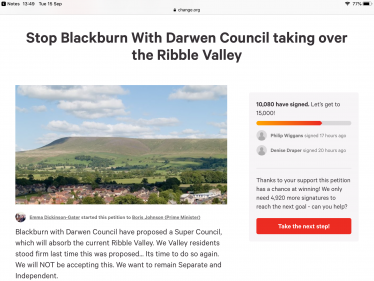 At the beginning of June this year, just under three and a half months ago Emma Dickinson Gater a Ribble Valley resident placed on the Change. Org website a petition to Prime Minister  Boris Johnson to reject any  attempt to merge Ribble Valley Borough with other local  authorities in East Lancashire particularly Blackburn with Darwen. The petition reads

Village on High Alert following spate of serious vandalism by youths. Local Councillors call for the introduction of a zero-tolerance Policy.

Councillors Sue Bibby and Stuart Hirst and residents of…

This map shows the extent of the geographical area that we represent on behalf of the Conservative Party.