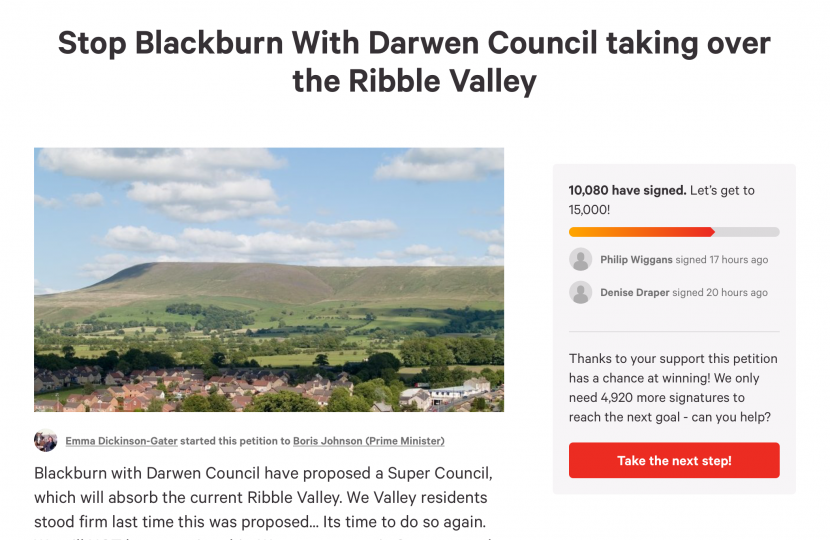 At the beginning of June this year, just under three and a half months ago Emma Dickinson Gater a Ribble Valley resident placed on the Change. Org website a petition to Prime Minister  Boris Johnson to reject any  attempt to merge Ribble Valley Borough with other local  authorities in East Lancashire particularly Blackburn with Darwen. The petition reads

Blackburn with Darwen Council have proposed a Super Council, which will absorb the current Ribble Valley. We Valley residents stood firm last time this was proposed... Its time to do so again. We will NOT be accepting this. We want to remain Separate and Independent.

The proposal is ridiculous. The Ribble Valley is NOT up for being split up, amalgamated with anyone.... We are staying just as we are. BACK OFF BLACKBURN!

Councillor Ged Mirfin the Deputy Chairman Political Campaigning of Ribble Valley Conservative Association states , “At time of writing just under 10,100 (10,080) Ribble Valley residents or 22% (21.97%) of the entire voting population in the Ribble Valley Borough Council Area are making it unequivocally clear that they do not want to be forcibly dragged into a Greater Blackburn or Pennine  Unitary Authority against their will.

To mark the petition reaching this record-breaking democratic milestone, the Conservative Leader of Ribble Valley Borough Council, Councillor Stephen Atkinson has written to the Prime Minister, Boris Johnson, in a personal capacity to draw his attention to the significance of the petition. In his Letter to the Prime Minister Councillor Atkinson focuses on the dangers to democracy that forcing through arbitrary changes to the structure and institutions of Local Government in Lancashire and the profound impact this will potentially have on the loyalties of Tory Voters in the Ribble Valley and more widely following a profound challenge to local identities established since 1974 following the last large-scale re-organisation of Local Government which took place over just shy of half a century ago - a long time in politics and a long period over which local identities have developed.

Councillor Mirfin continues, “Councillor Atkinson also stresses the accessibility of District Councils and the effective nature of the service delivery model which has been highlighted during the course of the recent Covid Pandemic with Ribble Valley demonstrating the innate capacity of the second tier of local government to fulfil the role of high performing and value for money authorities.”

Councillor Mirfin further continues, “Councillor Atkinson is correct to stress that any changes to the organisation of Local Government in Lancashire and Ribble Valleys place in it should only be made  following a rigorous process of consultation such as that encompassed in the petition has clearly demonstrated.”

“When people’s sense of identity is threatened by what appears like arbitrary re-organisation, the likely reaction is a feeling of dislocation and loss of identity. The phenomenon – the fear of hyper local change, will lead to large scale disruption in people’s lives as their identity is challenged.”

“This petition as Councillor Atkinson indicates shows the real strength of feeling about preserving  Ribble Valley Council as the authentic voice of the community with local democratic accountability. It is clearly felt that decisions affecting the delivery of local services in the Ribble Valley should be made by RIbble Valley Councillors to the benefit of Local Residents.”

Councillor Mirfin concludes, “This is why Ribble Valley Borough Council is the only Council thus far to call for a referendum. Until the voters of the Ribble Valley tell us different in a referendum we will continue to advocate retaining the status quo. The creation of a Combined Authority and Local Government Re-Organisation, as Councillor Atkinson points out are 2 fundamentally different things. Also less will not automatically lead to more, nor will it necessarily lead to levelling-up in the immediate short-term between affluent and deprived or should that be areas of moderate to high growth and areas whose decline is being managed over the long-term. Rather than leveling-up we could be faced with a situation of leveling-down to a lowest common denominator. Forced re-organisation means that some districts will lose out at the expense of others within the new frameworks. Will more deprived areas lose out to more high growth and prosperous areas? Or will the less well performing areas hold back the high growth areas using them as “cash cows” to resolve their problems of social deprivation including burgeoning social care budgets?”

“For impatient reformers surface institutional change is relatively easy to accomplish but at the same time this can be very bloody and incredibly disruptive and costly in the short-term. The likely variations in policies and services rather than diminishing will actually result in even greater undesirable inequalities between areas of what will in fact be Sub-Sub Regional Government - Areas wholly lacking in any sense of Community or Local Identity.”

As Councillor Atkinson points out, “I seriously wonder whether some Politicians at a National, Regional and Sub-Regional Level have learnt anything at all from Brexit. Identity is now at the very core of political debate. Local Identity Politics is even more important to Local People especially when very local services like weekly bin collections, not charging additionally for Green Waste and access to a high performing Council which ranked in the top 10 Councils in the Country for delivering business support grants to Businesses struggling during the Covid pandemic affect people’s lives in a personal way. A significant distrust of politicians and institutions has grown up in this country fuelled by a sense among large numbers of the general public that they no longer have a voice in the national and in this case the local conversation.”

“The petition to Stop Blackburn with Darwen Council taking over Ribble Valley sends a very clear message that really big decisions affecting people’s lives require active public consultation not decisions forced upon them taken in private meetings hidden away from a public which should have been consulted. At the end of the day the general public don’t like things being done to them and when they do raise their voices what they say comes as a rude awakening to some of our political elites.”

“Large Unitary Authorities covering up to 350,000 Voters will be remote. Institutional reform therefore will not lead to innovation in many cases it will result in large scale displacement as residents will find services severely disrupted (bi/tri weekly bin collections carried out by an out-sourced service deliverer who won’t know the local area as well and perish the thought the location of Council Offices located in difficult to access locations: Fleetwood, Blackpool or Preston - never mind the large-scale raft of phone number changes- it all has the potentiality to be very disconcerting.”

This why Ribble Valley Borough Council in its first Full Council Meeting which took place by Zoom resolved to:

Await the publication of the Government’s English Devolution White Paper before exploring further the creation of a Lancashire Combined Authority with a Directly Elected Mayor with limited powers.

Reject any form of local government reorganisation as a precondition for the devolution of funding  and powers from the Government to Lancashire.

The full text of Councillor Atkinson’s Letter to the Prime Minister, Boris Johnson, is given in full below:

I write to you in my personal capacity as Conservative Leader of Ribble Valley Borough Council.

You will shortly receive a petition (https://www.change.org/p/boris-johnson-stop-blackburn-with-darwen-council-taking-over-the-ribble-valley) that has been signed by over 10,000 people.  To put that in context that is 22% of the Ribble Valley Council’s Electorate. If this was an equivalent national poll it would be signed by over 10 million people.  In the 2019 General Election the Conservative Party received 13,966,454 votes throughout the UK.

The people of the Ribble Valley have been loyal to the Conservative Party since 1991 when the by-election, triggered by the elevation of the then Home Secretary, David Waddington, to the House of Lords, resulted in a humiliating defeat for the Conservative Party and a famous win by the Liberal Democrat candidate, Michael Carr who beat the new Conservative candidate and our subsequent MP Nigel Evans by 4,601 votes removing a previous majority of 19,508 hemorrhaging 12,360 Tory votes in the process - a loss of 22.3%.

• Winning candidate Michael Carr, who went on to lose the seat to Nigel Evans in the 1992 General Election, said in his victory speech: ‘Here lies the poll tax – buried in Ribble Valley’.

• Our Lancashire Conservative MPs represent constituencies where local identity is of the highest priority to the electorate.

• It is my view and that of many loyal Conservatives the abolishing of District Councils will do more harm to the party’s electoral chance in the next four years than any amount of goodwill created by the levelling up agenda. Brexit as has been shown drives emotion that drives voting choices.

• The fallacy that you need to reorganise to deliver levelling up has been demonstrated to be untrue during the Covid 19 Pandemic:

o Community Hubs were rolled out quickest and most effectively by Districts.

o Districts were able to contact shielded residents offering reassurance and support more easily because they are closer to their communities.

These examples show that Districts do better in service delivery because they are closer to their communities and more responsive.

Civil servants want simplified structures, but Council Tax is the highest household bill.  Only monopolistic service providers would remove choice and local preference to their customers!

As a businessperson I feel that it is the culture of the institution not its structure that delivers success.  Large companies run smaller divisions that are flexible responsive and manageable.

The Labour Party took its electorate for granted, please do not lose longstanding and newly acquired Red Wall seats by underestimating local identity.  In rural seats like Ribble Valley if we are subsumed into a larger unitary Council we will simply become the funders of adjacent deprivation, with less and less services provided for rural residents.  This has been seen from the Labour Police and Crime Commissioner in Lancashire, where rural area police precepts fund urban policing and yet rural policing is at times virtually non-existent.

Let the priority be for us to all work together to fight Covid 19 and deliver levelling up in record time.  This can be best achieved by relying on those Rural Districts and their staunch Conservative supporters who value the sense of Place.

Finally, the forthcoming Devolution White Paper will generate a debate on local government in two tier areas like Lancashire.  I strongly believe Districts have an important role in delivering local government services, this can be strengthened leaving counties or indeed Combined Authorities to take more of a strategic oversight.

The message I take from the petition is that we must not become too remote from the people we serve.  I know many Districts have a direct link to Parliament through their local MP.  Delivering services at a local level engenders a sense of involvement in the place where someone lives even to the extent that they become involved in local politics.  We shouldn’t put that at risk by creating large urban based unitary authorities.

If you wish to discuss I can meet you wherever whenever.

LEADER OF THE COUNCIL

Well over 10,500 people mainly over 70, care and frontline workers including those in the NHS  have been vaccinated at Clitheroe Health Centre since the start of the vaccination programme from all over the Ribble Valley.