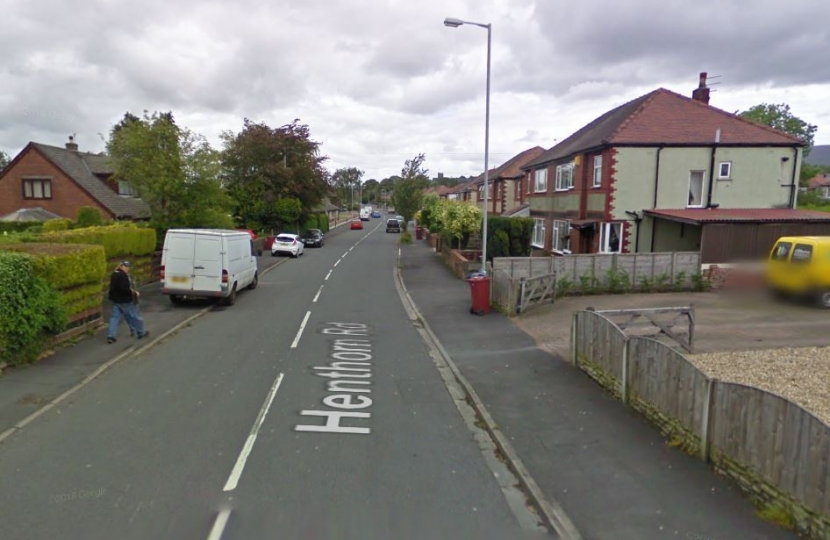 Planning Inspector, Stephen Normington, has overturned the decision of the Planning Committee at Ribble Valley Borough Council to refuse a third application by Gladman Developments Limited to build yet more houses at the end of Henthorn Road.

The application was refused because Committee Members argued the proposed development was inappropriately located outside the Clitheroe settlement boundaries but more important was not sufficiently accessible and sustainable with particular issues regarding the accessibility of the site to services and facilities for future residents in terms of limiting the need to travel and not offering a genuine choice of transport modes.

The Inspector admits that the proposed development site “is” located on the edge of, but outside, the settlement boundary of Clitheroe and as such it lies within the open countryside.

However, the Inspector points out that Policy DMG2 of the Core Strategy provides that, “Tier 1 Villages should consolidate, expand or round-off development so that it is closely related to the main built up areas” - a process defined as ‘Rounding Off’. He admits such rounding off requires development to be within the settlement boundary. However, applying a definitional sleight of hand he also points out that  ‘consolidation’ is defined as locating development so that it adjoins the main built up area of a settlement. ‘Expansion’ meanwhile allows for limited growth of a settlement. In other words what is occurring is not so much rounding off but more consolidation and expansion. This takes us into new territory and suggests that settlement boundaries can be ignored if consolidation and expansion are taking place. Who decides whether these processes are indeed taking place - the Planning Committee, the developer or the planning Inspector?

More worrying still are the conclusions the inspector reached with regard to issues of Accessibility and Sustainability.

This is where the Inspector is at his contentious best. He argues in his decision, “In my view a degree of realism needs to be applied to the distances in the guidance and the locational circumstance of the appeal site. It is clear that there are a range of facilities within an easy walk of the site. Although the town centre is 2,000m away....” A site the Inspector describes as being not just at the edge but, “at the extreme edge of the urban area and approximately 2km from the town centre and Clitheroe Railway Station.” For those who don’t do metric - that is 1.25 miles there. Forgetting of course that is 1.25 miles back. A round trip of 2.5. If you have a fit bit that would be nearly 5,000 steps - if your a bit fit that is. If you’re not it’s more likely to be an awful lot more. For the old, infirm and disabled it would be an awful lot more. Indeed on a wet or unusually warm or cold day the journey may be prohibitive isolating certain groups of people occupying the social market housing or bungalows for the elderly almost completely. The Inspector completely failed to understand the key demographics of owner occupation in the Ribble Valley.

To paraphrase Steve Rush, the Chairman of the Clitheroe Residents Action Group, ‘It is obvious that nobody in their right mind on a pouring wet day is going to walk all the way into town only to struggle to walk back weighed down by half a dozen heavy shopping bags on a return journey of 1.25 miles.” Ludicrous.

The Inspector must have been a very fit man. In his submission he claims,  “The walk from the appeal site to the town centre, which I undertook at the site visit, was neither unduly lengthy nor strenuous. I consider that some residents are likely to walk into the town centre as a matter of choice.” Those that don’t have access to a car or aren’t prepared to wait in the rain for a bus to show up. The nearest  convenience store (McColls) on Henthorn Road is 1km away.

If as he draws attention to ‘walkable neighbourhoods are typically characterised by having a range of facilities within 10 minutes (up to about 800m) walking distance of residential areas in which residents may access comfortably on foot then some of those facilities are outside of the extreme range in terms of walking distance and will take far longer than 10 minutes to get there. This is certainly not a distance many can access comfortably on foot unless you are a fit Planning Inspector.

The issue is knowing where the shoe pinches. To dismiss the Views of what the Inspector describes as, “local residents and interested parties” is storing up trouble for the future. It will be local voices who will articulate issues most loudly if the desired circumstances fail to materialise and the site fails to be as accessible as hoped or promised.

Walking moreover is not a lifestyle choice particularly for those with reduced mobility. This is not the kind of proposal in the Core Strategy designed to locate development in areas which maintain and improve choice for people to walk rather than drive between homes and facilities.

The critical issue is that pedestrian access to the Leisure Centre, Swimming Pool and Spar convenience store on Edisford Road rests very much on the perception of the Inspector. As he clearly states, “In my view, all of these facilities are within an easy walk from the appeal site.” He further concludes,  “I consider that the footway infrastructure in the vicinity of the site to be adequate for the range of users including those persons requiring the use of mobility equipment.” Lets just hope that the batteries on their notability scooters are well charged and are robust and sufficiently hard wearing to cope with the inadequate state of some of the Pavements that the Inspector admits exist on certain stretches of Henthorn Road.

Furthermore, despite the fact there is little material difference in the walking distances to the town centre and those nearer facilities for the prospective residents of the appeal site and those of the Blakewater Road development and the Storey Homes development currently under construction this ignores the huge amount of public disquiet articulated in relation to the connectivity problems that local residents have experienced travelling backwards and forwards from and to the town centre.

It is a major contention that the site is  “adequately accessible to local facilities and the town centre by means of walking.” Only time will tell if the prognosticators of the Inspector are correct. It is not the case that, “There is no evidence to suggest that the residual cumulative impacts on the road network would be severe.” It is that the disparity between models of traffic movements on Henthorn and the Empirical Evidence provided by Local Residents to the contrary is being dismissed or ignored. It is not the case that there is, “no demonstrable evidence....to suggest that the predicted traffic generation for the development would have a severe effect on the operation of the Henthorn Road/Thorn Street junction,” as the Inspector claims it is that evidence is of a different category and nature from the evidence provided by statutory consultees in the form of modelled data is therefore disregarded because it is inconvenient.

The ‘Principle SoCG’ states that the sole area of disagreement between main parties as to whether the appeal proposal accords with the development plan is in relation to accessibility of the appeal site, despite the fact that Ribble Valley already has a 5 year land supply. It further stated that if it is found that the appeal scheme was accessible and the proposal accords with the development plan then it should be approved without delay as per the presumption in the NPPF in favour of sustainable development.

In other words sustainability and accessibility trumped having a 5 year land supply.

The purpose of the SOCG is to inform the Inspector about the areas of agreement between Ribble Valley Borough Council and the appellant over what the appeal was ultimately about and being fought over and the issues at stake.

The purpose and possible content of SoCGs is set out in paragraphs 58-65 of the Department for Communities and Local Government’s guidance entitled “Planning Act 2008: examination of applications for development consent” (26 March 2015).

Paragraph 58 of that guidance explains the basic function of SoCGs:

“A statement of common ground is a written statement prepared jointly by the applicant and another party or parties, setting out any matters on which they agree. As well as identifying matters which are not in real dispute, it is also useful if a statement identifies those areas where agreement has not been reached. The statement should include references to show where those matters are dealt with in the written representations or other documentary evidence.”

SoCGs are therefore a useful and established means of ensuring that the evidence at examination focuses on the material differences between the main parties, and so aim to help facilitate an efficient examination process. It is intended that SoCGs should provide matters on which parties agree. As well as identifying matters which are not in dispute, the SoCG may also identify areas where agreement has not been reached.

In this case the parties agreed that the key areas of disagreement related to whether Ribble Valley had a 5 Year Land Supply, whether the development site was inappropriately located outside the Clitheroe settlement boundaries and whether it was sufficiently accessible and sustainable.

As to whether the issue of settlement boundaries ought to have been included in the SOCG is a moot point because of the danger that by doing so it might set precedent even before the Housing and Economic Development Plan Document (HED DPD) is finalised and with it the settlement boundaries.

Unfortunately like most permissive legislation there is a lack of clarity over what planning reasons and the status of individual reasons Local Planning Authorities can offer to refuse contentious developments on the edge of towns.

Ribble Valley Conservative Association therefore calls upon the Planning Minister, Kit Malthouse MP to consult the Government’s Legal Advisers on the hierarchy of Legislation and to rule on whether the Housing and Economic Development Plan Document (HED DPD) is superior to policy Statements contained in Core Strategy Documents and to precisely define the legal process that must be followed when it comes to “rounding off”; “expanding” or “consolidating” existing settlements.

It further calls on the Planning Minister to define much more precisely what accessibility means and just how far it is ultimately “reasonable” for pedestrians to walk from new housing developments located on the edge of towns to access services.

Ribble Valley Conservative Association will be Calling on its MP, Nigel Evans to lobby the Planning Minister and to put these questions directly to him.